Public support for devolution is growing at precisely the moment that enthusiasm appears to be waning in Number 10. This is extremely concerning as greater devolution will be critical for levelling up and decarbonisation.

Speaking at a Net Zero APPG meeting last week, Mayor Andy Burnham described the recent local elections as the ‘devolution election’. There has been a big shift in public perception since 2017 when the regional Mayoral system was viewed by some as potentially a white elephant. The elections saw turnout increase in all areas except London, and thumping majorities for the incumbents in Manchester and Tees Valley.

As a former Mayor himself, Boris Johnson has long advocated for fiscal devolution and more policy levers. Initially the signs were that his Government was set to deliver the biggest shake-up in English local government for more than 30 years. However, the Devolution and Local Recovery White Paper expected last September was “postponed”. Last week the BEIS Select Committee was advised by Ministers that the Devolution White Paper will now be included in the Levelling Up White Paper, to be expected “later in the year”.

Word is that the local government reforms have been scaled back, with less emphasis on devolution. The reforms had been met with fierce opposition from Conservative-controlled district councils, which feared being absorbed into wider county-sized areas. One might also speculate that Ministers have gone a bit cool on devolution after the public spat with ‘King of the North’ on regional tiers. Perhaps there is a realisation that giving people like Andy Burnham a voice can cause acute political difficulties.

However, as Burnham emphasised, devolution does not in any way undermine the role of Parliament and is vital to achieving net zero. “Early adopters should be driving the pace on decarbonisation. Parliament legislates for the slowest, but why not free up the fastest moving?”

Decarbonisation strategy requires the overcoming of government silos. Coordination of different aspects of policy is much easier at a devolved or regional level. The Scottish Government has embedded net zero as core Government policy. Transport Scotland has set a target of 20% fewer car kms by 2030. The Welsh Government is targeting 45% of journeys by sustainable modes by 2045. London’s target is for 80% by sustainable modes by 2041. Newly re-elected Mayor Sadiq Khan has committed to significantly expanding the world’s first Ultra Low Emission Zone (ULEZ) from October this year.

Beyond the capital, however, England has one of the most centralised systems of government in the world. Local government is a patchwork of different governance models and powers. An evaluation of the devolved institutions published earlier this month by BEIS concluded that devolution policy in England has evolved in a fragmented way over time through different pieces of legislation, often appearing confusing, ad hoc and asymmetrical to the public. Local areas need more resource, and to be able to plan long-term rather than relying on ad-hoc fragmented funding streams.

A recent report for UK100 makes a compelling case for change. Power Shift lists some examples of outstanding innovation. Brighton and Hove City Council is leading the way with its car free housing development policy. Nottingham City Council is supporting new public transport infrastructure through its Workplace Parking Levy. However, for such innovation to become mainstream, Government must provide local leaders with sufficient powers and resources but there is no coherent national strategy in place.

A clear and consistent key theme is the need for a more stable funding regime and integrated local growth strategies. The National Infrastructure Commission recommends that local devolution and longer-term funding be brought into a new model, putting decision making into the hands of local leaders who will be accountable for delivering benefits locally. Devolved budgets should be spread across the country and embedded in legislation to mark a permanent change away from short term, fragmented funding pots.

In its final annual report before being disbanded, the Industrial Strategy Council was highly critical of the government’s approach to ‘levelling up’ for being overly reliant on infrastructure spending and the continued used of centrally controlled funding pots thinly spread across a range of initiatives. Local growth needs to be rooted in local strategies, covering not only infrastructure but also skills, sectors, education and culture – as was the intention for the Local Industrial Strategies drawn up under the 2017 Industrial Strategy.

The National Infrastructure Strategy promises a change in how decisions are made. Pointedly it states that next year the Government “will review the fiscal remit for the National Infrastructure Commission, to ensure it reflects the government’s long-term ambitions”. It talks of “creating regional powerhouses, making cities the engines of growth and revitalising towns”, “levelling up and strengthening the Union” and of moving decision making out of London. However, relocating 22,000 civil servants out of London and the South East by 2030 feels more like expanding the reach of Whitehall than devolving power.

The tensions in policy are palpable and reconciling some of the contradictions will be an increasing challenge for policy makers. In his introduction to the Interim Union Connectivity Review, Sir Peter Hendy stated that “devolution has been good for transport where its delivery has been devolved” but conversely this has led to a certain lack of attention to connectivity between the four nations, due to competing priorities and complex funding. A key emerging recommendation is development of a new UK Strategic Transport Network. The test will be how well this is received by the devolved administrations.

With exception of the £4.2 billion in five-year budgets for the Mayoral Combined Authorities, the current direction of policy is a top-down approach. The Strategy will increase the UK Government’s ability to invest directly in Scotland, Wales and Northern Ireland through the UK Internal Market Bill. Far from moving away from separate funding pots, areas are being encouraged to bid for investment such as the £4 billion levelling up fund, the towns fund aimed at revitalising 100 town centres, and the £5 billion fund for buses and cycling. But the PM surely understands better than anyone how crucial devolution has been to the success of the bus network in London.

It’s all a far cry from the vision outlined to the LGA last July by Simon Clarke (then Minister in charge of devolution). He explicitly linked future funding and powers to the reorganisation of local government in England into Unitaries and Combined Authorities, levelling up every region and fundamentally rewiring the role of the state. The White Paper never materialised. However, a root and branch reform of such magnitude is precisely what is needed to level up the country and deliver net zero.

A longer version of this article will be published by Passenger Transport magazine on 28th May. Claire Haigh is founder and CEO of Greener Transport Solutions.  She will be speaking at the The Northern Transport Summit 27th May 2021 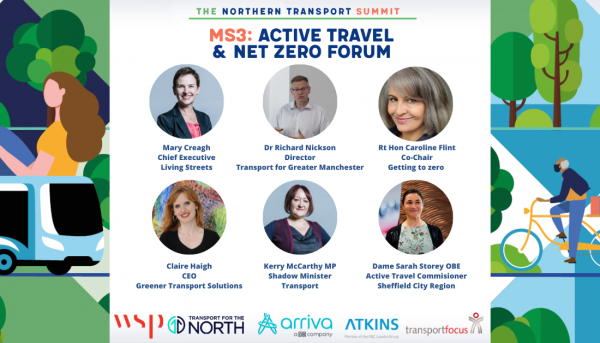